Did You Know There is a NEW Seven Wonders of The World List?

Did you know there is a NEW seven wonders of the world list? Me neither! Well, I mean, I didn’t before but I do now. 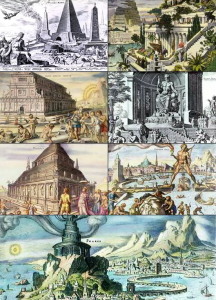 The Seven Wonders of the Ancient World

As a refresher, the Seven Wonders of the Ancient World are:

Sadly, of the Ancient Wonders, only the Great Pyramid of Giza can still be seen.

In 2001 an initiative was started by the Swiss corporation New7Wonders Foundation to choose the New Seven Wonders of the World from a selection of 200 existing monuments through online votes. In 2007 after some 100 million people voted the list was announced.

So, now that the anticipation has been built to a terrifying frenzy, here is the list of the New Seven Wonders of the World, in alphabetical order. 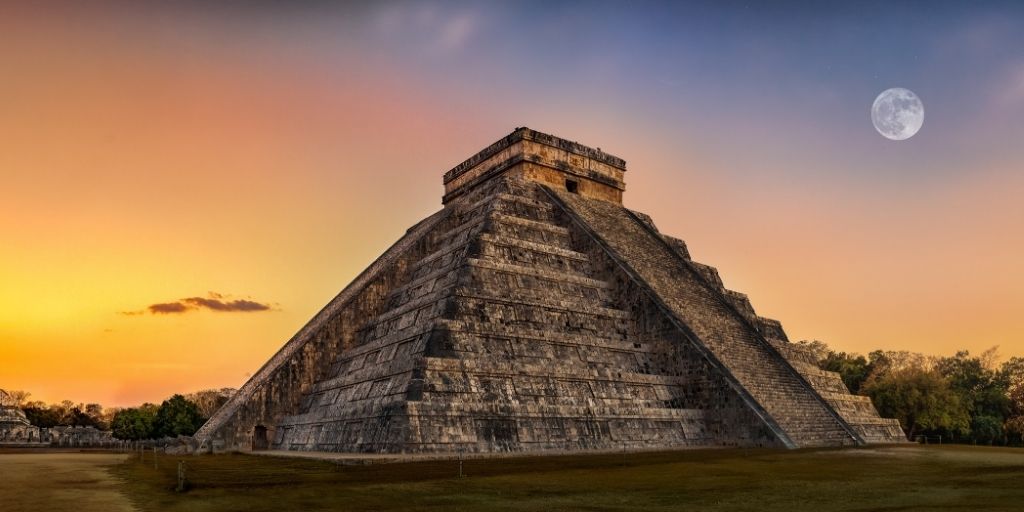 Chichen Itza was a large pre-Columbian city built by the Maya people.

Chichen Itza was one of the largest Maya cities and it was likely to have been one of the mythical great cities, or Tollans referred to in later Mesoamerican literature. The city may have had the most diverse population in the Maya world, a factor that could have contributed to the variety of architectural styles at the site.

Chichen Itza is one of the most visited archaeological sites in Mexico. I’ve been there and I can say without hesitation that the entire complex is awe-inspiring.

Some conspiracists believe that the Maya had close contact with extraterrestrials who helped them build Chichen Itza and other Maya cities, but that’s a whole different discussion. 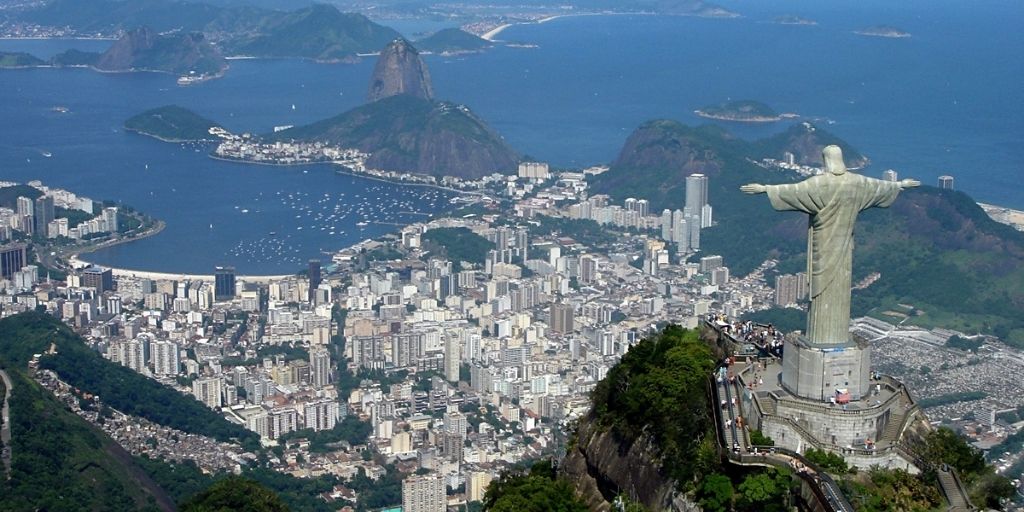 Christ the Redeemer, or Cristo Redentor in Portuguese, is an Art Deco statue of Jesus Christ in Rio de Janeiro, Brazil. Constructed between 1922 and 1931, the statue is 30 metres (98 ft) high, excluding its 8-metre (26 ft) pedestal. The arms stretch 28 metres (92 ft) wide.

The statue weighs 635 metric tons (625 long, 700 short tons), and is located at the peak of the 700-metre (2,300 ft) Corcovado mountain in the Tijuca Forest National Park overlooking the city of Rio de Janeiro. A symbol of Christianity around the world, the statue has also become a cultural icon of both Rio de Janeiro and Brazil. It is made of reinforced concrete and soapstone.

Let’s just say it. It’s very very big. I haven’t had the pleasure to visit Brazil yet. It’s still on my bucket list. But I’m told that the views from this statue are spectacular. 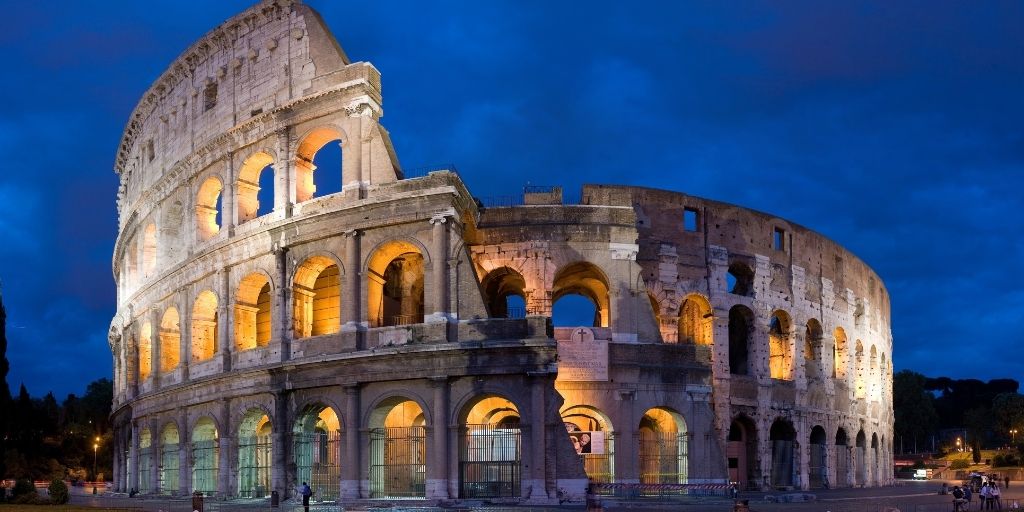 The Colosseum, also known as the Flavian Amphitheatre, is an oval amphitheatre in the centre of the city of Rome, Italy. It was the largest amphitheatre ever built at the time and held 50,000 to 80,000 spectators. The Colosseum is just east of the Roman Forum. Construction began under the emperor Vespasian in AD 72 and was completed in AD 80 under his successor and heir, Titus. Further modifications were made during the reign of Domitian (81–96). These three emperors are known as the Flavian dynasty, and the amphitheatre was named in Latin for its association with their family name (Flavius).

Although substantially ruined because of earthquakes and stone-robbers, the Colosseum is still an iconic symbol of Imperial Rome. It is one of Rome’s most popular tourist attractions.

I was only able to see the Colosseum from the outside unfortunately as it had closed early when I was there because of it being New Year’s Eve, but it is still very impressive to take in and walk around. It is quite a wonder, especially given when it was built and how it still outshines some of our modern entertainment venues today. 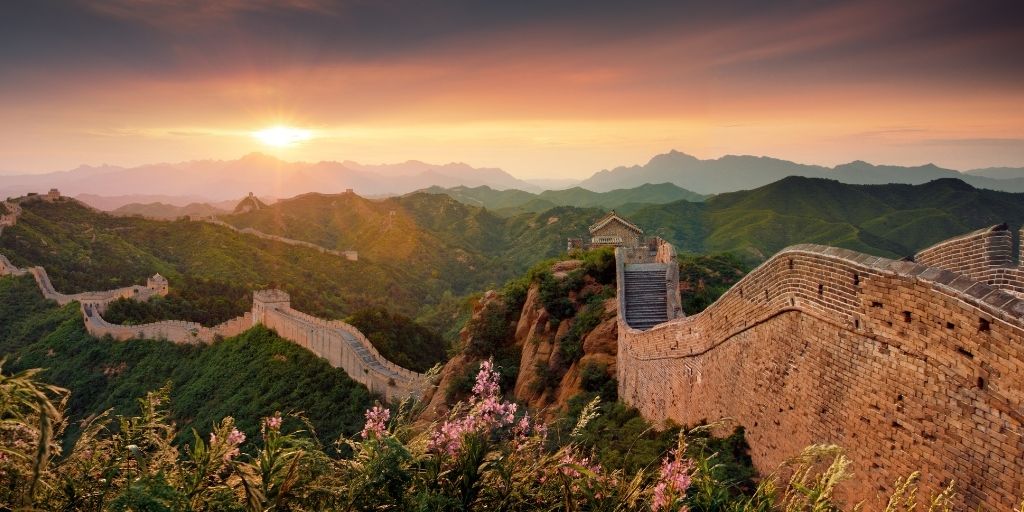 The Great Wall of China

The Great Wall of China is the collective name of a series of fortification systems generally built across the historical northern borders of China to protect and consolidate territories of Chinese states and empires against various nomadic groups. Several walls were being built from as early as the 7th century BC by ancient Chinese states; selective stretches were later joined together by Qin Shi Huang (220–206 BC), the first emperor of China. Sadly, little of the Qin wall remains. Later on, many successive dynasties have built and maintained multiple stretches of border walls. The most well-known sections of the wall were built by the Ming dynasty (1368–1644).

The Great Wall is so vast and covers so much area it’s impossible to see it all. Plus, many parts of it are either in a state of ruin or extremely remote. Most visitors to the Great Wall of China access it via Beijing. However, the most touristy sections are not as authentic as they’ve been reconstructed to resemble the original. With that said, I still think the Great Wall of China is worth visiting and if you can get a tour to a more remote, authentic area of the Wall, even better.

Machu Picchu is a 15th-century Inca citadel, located in the Eastern Cordillera of southern Peru, on a 2,430-metre (7,970 ft) mountain ridge.

Most archaeologists believe that Machu Picchu was constructed as an estate for the Inca emperor Pachacuti (1438–1472). Often mistakenly referred to as the “Lost City of the Incas”, it is the most familiar icon of Inca civilization. The Incas built the estate around 1450 but abandoned it a century later at the time of the Spanish conquest. Although known locally, it was not known to the Spanish during the colonial period and remained unknown to the outside world until American historian Hiram Bingham brought it to international attention in 1911.

Machu Picchu was declared a Peruvian Historic Sanctuary in 1981 and a UNESCO World Heritage Site in 1983.

Thousands of tourists walk the Inca Trail to visit Machu Picchu each year. They gather at Cusco before starting on the one-, two-, four- or five-day journey on foot from kilometer 82 (or 77 or 85, four/five-day trip) or kilometer 104 (one/two-day trip) near the town of Ollantaytambo in the Urubamba valley, walking up through the Andes to the isolated city. However, most tourists get to Machu Picchu by train from Cusco and then bus.

Because of the altitude of Machu Picchu, it is highly recommended to get on altitude sickness medication before visiting. The last thing you want to do on your trip is to get sick and not be able to enjoy the experience. 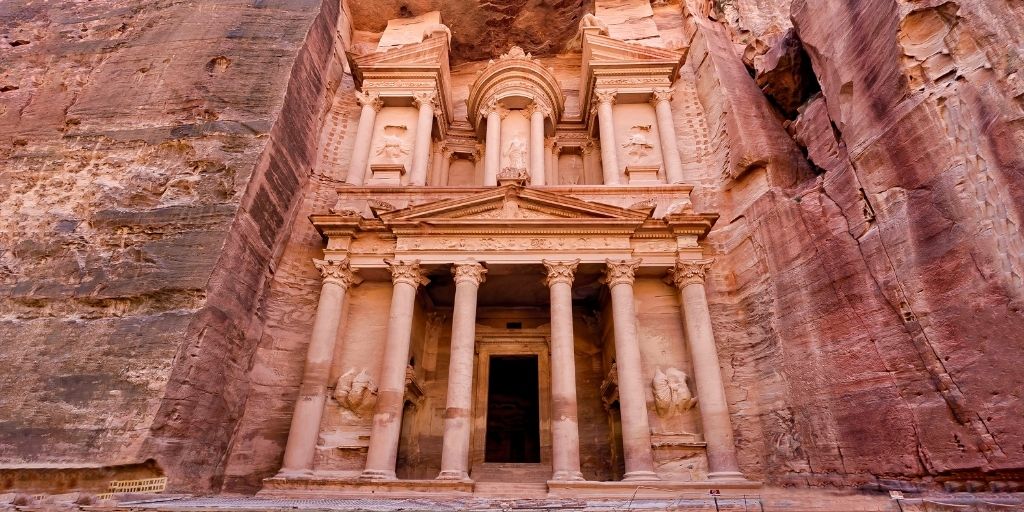 Petra is a historical and archaeological city in southern Jordan. The area around Petra has been inhabited from as early as 7000 BC, and the Nabataeans might have settled in what would become the capital city of their kingdom, as early as the 4th century BC. However, archaeological work has only discovered evidence of Nabataean presence dating back to the second century BC, by which time Petra had become their capital. The Nabataeans were nomadic Arabs who invested in Petra’s proximity to the trade routes by establishing it as a major regional trading hub.

Access to the city is through a 1.2-kilometre-long (0.75 mi) gorge called the Siq, which leads directly to the Khazneh. Famous for its rock-cut architecture and water conduit system, Petra is also called the ‘Rose City’ because of the colour of the stone from which it is carved. It has been a UNESCO World Heritage Site since 1985. UNESCO has described Petra as “one of the most precious cultural properties of man’s cultural heritage”.

Petra is definitely on my bucket list, and not ONLY because it was on Indiana Jones and the Last Crusade, but because those that I have talked to who have been said it is an absolute marvel and worth all of the accolades it has received. 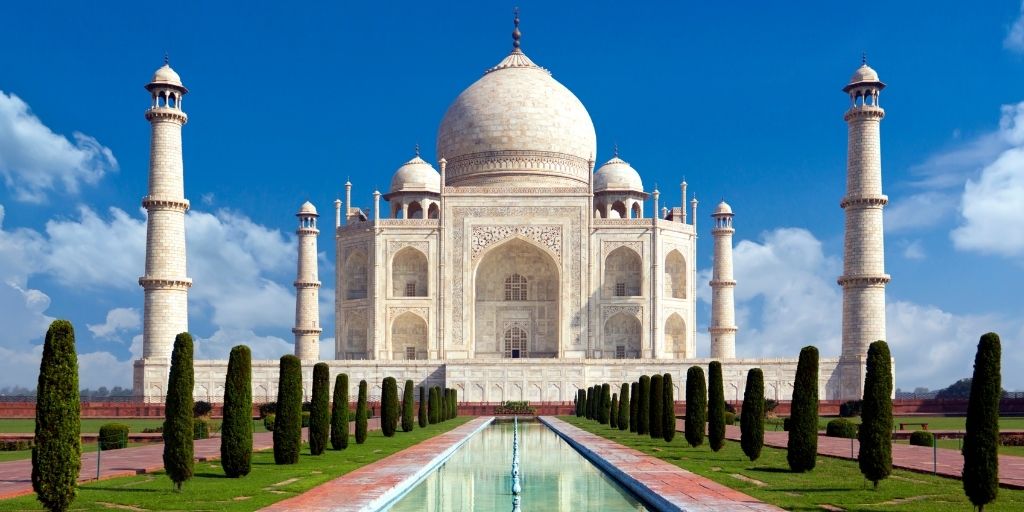 The Taj Mahal, or ‘Crown of the Palace’, is an ivory-white marble mausoleum on the southern bank of the river Yamuna in the Indian city of Agra. It was commissioned in 1632 by the Mughal emperor Shah Jahan (reigned from 1628 to 1658) to house the tomb of his favourite wife, Mumtaz Mahal; it also houses the tomb of Shah Jahan himself. The tomb is the centrepiece of a 17-hectare (42-acre) complex, which includes a mosque and a guest house, and is set in formal gardens bounded on three sides by a crenellated wall.

The Taj Mahal was designated as a UNESCO World Heritage Site in 1983 for being “the jewel of Muslim art in India and one of the universally admired masterpieces of the world’s heritage”. It is regarded by many as the best example of Mughal architecture and a symbol of India’s rich history. The Taj Mahal attracts 7–8 million visitors a year.

When it comes to memorials to lost loved ones I think the Taj Mahal takes the cake. I haven’t visited in person yet, it’s still on my bucket list, but I can just imagine how serene it must be.

So, did you know there is a NEW seven wonders of the world list? Well, now you do!

Of course, when it comes to monuments and lists there are wide-ranging opinions. But the fact that this list was decided on by 100 million world-wide votes says a lot.

Tags: 7 Wonders of the Worlddestinationsnew7wonders

Any cookies that may not be particularly necessary for the website to function and is used specifically to collect user personal data via analytics, ads, other embedded contents are termed as non-necessary cookies. It is mandatory to procure user consent prior to running these cookies on your website.